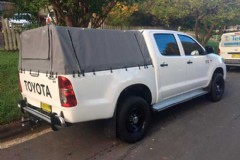 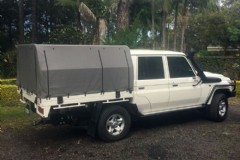 Wallaby Track Canvas is also the only company that can manufacture the frame and canvas canopies for many of the most common trays and tubs without requiring the ute to do so. These frames match the profile of the headboard of the tray/tub, which is preferred by most customers as it best follows the vehicle shape, offers the least wind resistance and looks good on the vehicle.

All Wallaby Track Canvas ute canopies are made in Australia using Australian made Wax Converters canvas.

Below are the ute types and trays we can manufacture for: Just give us a call or send an email for an approximate price on the job you require.

How To Get Here..